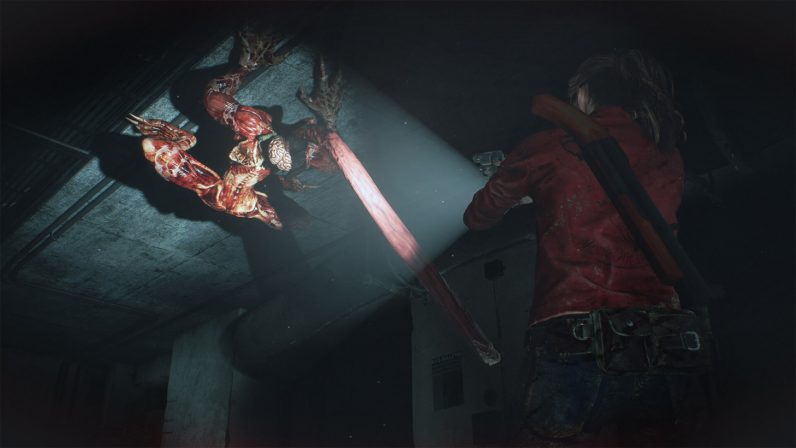 The story, as we know it so far, is this: Jade and Billie Wesker are forced to move to New Raccoon City, a town with dark secrets (and with a name like that, it’s not a big surprise). Then we cut to a second timeline following an adult Jade in the T-virus-decimated future. I’m not sure why the two timelines are separate, but I’ll accept that this might be explained in the show. Considering the summary makes reference to the girls’ father and their name is Wesker, I’m going to assume they’re probably intended to be the offspring of series’ antagonist Albert Wesker.

So far, it kind of sounds like the series is going to take place, at least in part, within the film universe. As of the latest entries in both film and game ‘verses, the films are the only one in which the world has been destroyed (though Resident Evil: Village might prove me wrong, there). The series is also being produced by Constantin Films, the production company behind the RE film series. Showrunner Andrew Dabb expressed his love for the series in a statement (via Hollywood Reporter) and implied we’re going to see at least a few of the game characters too: “For every type of Resident Evil fan, including those joining us for the first time, the series will be complete with a lot of old friends, and some things (bloodthirsty, insane things) people have never seen before.”

That’s cool and all, but I’ll be honest, the description of the the story doesn’t sound even within the same area code as the games. The lead characters are two teenage girls? And they’re Wesker’s kids? Maybe I played a different game than Dabb did, but I don’t see Wesker being a particularly domestic individual — heck, he abandoned his only other known child, RE6 protagonist Jake. And we’re calling the city “New Raccoon City?” Given what happened to the original Raccoon City, wouldn’t that be pretty insensitive?

Okay, look, I’m probably being overly picky. I love the absolute shit out of Resident Evil and its whole goofy story. I will rewatch every last ridiculous cutscene from 4, 5, and 6 with a big smile on my face. But even I will concede that the games with the most cohesive stories are the ones as little related to the overarching narrative as possible — especially 4 and 7. The first Resident Evil film stars a character who doesn’t even vaguely resemble anyone in the games, and it’s still the best of the bunch.

It’s very telling that the description for the series doesn’t even mention zombies — it alludes to the T-virus, but otherwise sounds like something cobbled together from rejected rip-offs of Netflix‘s other scripts. The fact that it stars two children — who might very well be superhuman given who their parent is likely to be — is giving me major Stranger Things vibes.

Aw, who the hell am I kidding? I’m still going to binge it the second it drops. A Resident Evil series really only needs zombies and people killing zombies to truly please me. And if Netflix wants to ride its wave of Witcher good luck while simultaneously attracting Walking Dead fans, who am I to judge?

21 hours ago
What are darkish patterns, and the way do they have an effect on you?

21 hours ago
What are darkish patterns, and the way do they have an effect on you?