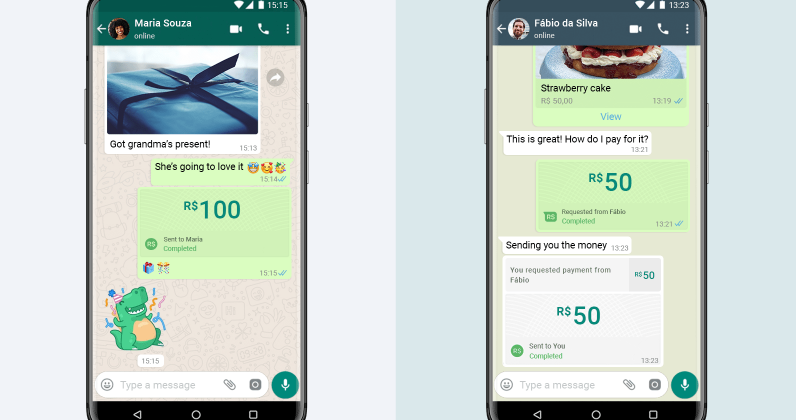 WhatsApp announced today that it’s launching the payment feature in Brazil. The feature is powered by Facebook Pay technology and payments are processed by Brazilian fintech company Cielo. Brazil is the second country after India to get this feature.

The company has tied up with several local merchants to let customers chat with them and easily make payments. You have to add your debit or debit-enabled combo card just once to start transacting with your friends and businesses. For now, the company will support debit or credit cards from Banco do Brasil, Nubank, and Sicredi on the Visa and Mastercard networks.

The chat apps said sending money or making purchases on WhatsApp is free for individual users:

Sending money or making a purchase on WhatsApp is free for people. Businesses will pay a processing fee to receive customer payments, similar to what they may already pay when accepting a credit card transaction.

In future, WhatsApp wants to enable people using a single card across Facebook’s family of services.

The company started testing payments feature in India first in 2018. However, it hasn’t been able to roll it out due to regulatory roadblocks. Earlier this year, Facebook’s CEO, Mark Zuckerberg had said that WhatsApp Pay will be launching in several countries in the next six months.

16 hours ago
Why embed analytics and knowledge visualizations in apps

1 day ago
The brand new residence for tech jobs

16 hours ago
Why embed analytics and knowledge visualizations in apps