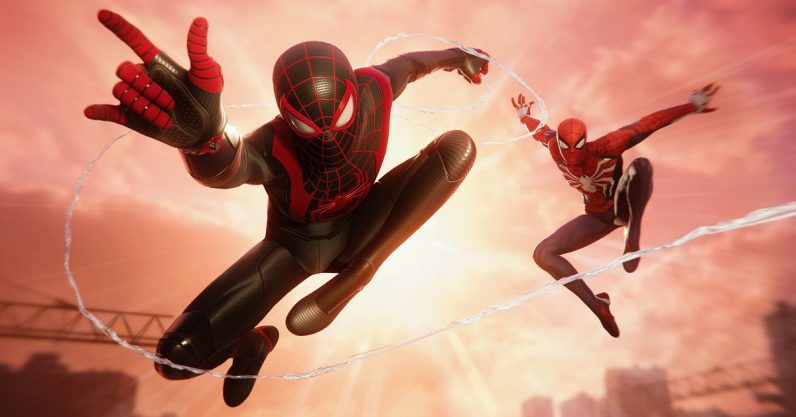 Let me cut right to the chase: if you have any interest in the Spider-Man games, then get this game. Not only is it a delightful retread of its predecessor’s gameplay, it’s got a much more interesting, personable protagonist. Considering the previous protagonist was Peter Parker, that’s quite a feat.

Spider-Man: Miles Morales is the spin-off/sequel to the PS4 classic Spider-Man, debuting as a launch title for the PlayStation 5. Sony sent me a copy when I got my PS5 and this was the first thing I played on that big frosty beast. Just to be clear, I would recommend it anyway, because at least it’s some kind of launch title — both next-gen consoles are very lean on those. But Miles Morales has a special charm and heart all its own.

Whatever a spider can

The story setup is pretty simple, if a little baffling: Miles screws up a major mission with Peter, accidentally unleashing Rhino on the city. When Rhino puts Peter down for the count, Miles discovers his electrical Venom powers and manages to knock the big galute out. So he not only barely has a handle on his work/life balance, he’s just discovered he has unusual powers he doesn’t understand. And then Pete announces he and MJ are taking an extended vacation to Europe.

Keep in mind, Pete had already booked the trip before Miles took down Rhino, so he was planning to leave Miles — who could barely hold his own against five or six ordinary men, let alone supervillains before he discovered his new powers — to police the city on his own for weeks. Peter Parker has never been a bastion of sound decision-making, but this guy is really fortunate his protégé lucked out harder than he did at the power lottery.

So the rest of the game is basically Miles trying to hack it on his own against an inexplicably powerful gang, deeply personal boss battles, and PMC goons out to get him specifically. Hmm… you know, I’m aware that Insomniac said the game is a standalone and not an expansion pack. Methinks the developer doth protest too much, because it sure sounds like an expansion pack when I describe it that way. I’m not sure the best way to give Miles center-stage is to drop Pete off the face of the earth, but if he were in the game Miles’ problems would be solved much too quickly, of course.

I think a good example of the differences between this and the main game are best exemplified in the swinging animations. Whereas Peter’s animations in the original game are sleek, confident, and agile — basically, what you’d expect from someone who’s been Spider-Man for years — Miles’s swinging animations are awkward and clumsy. He’ll accidentally invert himself, he’ll flail if he’s free-falling, and his legs go in every direction rather than bending gracefully like Peter’s.

But Miles has one thing that Peter, for all his charms in the last game, lacked: connection. Miles has a healthy, stable relationship with his mother and his best friend, easily makes pals in his new neighborhood of Harlem as both himself and Spider-Man, and doesn’t seem like he has more intimate relationships with his rogues gallery than with his own girlfriend (ahem, Pete). There are multiple times during the game when Miles will get on ground level and just talk to people.

There’s one particular moment in the game when Miles (as Spider-Man) approaches a young woman, and she responds to him in ASL. Without missing a beat, Miles immediately starts signing back. I’m not ashamed to admit I let out a delighted squeal, the moment was so precious. And it’s those moments of connection with the world around him that make him seem so much more fun than Pete. Sure, there were moments when Pete spoke to ordinary people, but they weren’t his friends and he didn’t really make a connection with them that I could see.

I think Peter could definitely have had more of those moments in the previous games or any game starring him moving forward — I’m almost positive a future game is going to star both him and Miles. I understand that the story of the last game didn’t afford Spidey much time to be a man of the people, but it still could have used that little bit of extra heart Miles’ connection to the city gives him.

This is gonna sting

Miles also really shines in the combat. You know how in the main game, you’d have certain suit powers, like Web Blossom, that would go a long way towards finishing fights quickly? I do feel sometimes the battles in Spider-Man were like battles of attrition, with Spidey having no recourse but to punch and kick ad nauseum until wave after wave of goons fell over, and the likes of Web Blossom would be a godsend if you wanted to just get it over with and get your darned crime tokens.

Miles’ Venom powers are basically that, with a much more forgiving cooldown time and more general utility in battle. Given enough juice, Miles can flatten whole crowds of enemies in a fraction of the time it would take to finish the fight as Peter.

I’m not going to lie to you and pretend this is a totally different game. There are collectables that don’t really make a whole lot of in-game sense. Miles still earns item upgrades via the asinine token system. The map of New York is virtually identical, just dressed up in Christmas colors.

The stealth sections remain largely unchanged — while Miles does have his invisibility powers, the basic principle of “isolate, web up, repeat” in the stealth bits hasn’t changed in a material way. I would actually start fights as Miles I never would as Peter just because I could enjoy juicing up and zapping all the enemies in the vicinity.

I love both games immensely, so I’m not going to say which one is better than the other — Spider-Man has more substance, for starters, and some in-game events of Miles Morales (no spoilers) make it feel like a thinly-veiled attempt to capitalize on the fame of Into the Spider-Verse. But if I have my choice of who to hang out with, Miles is just so much more personable.

24 hours ago
The Devices

24 hours ago
The Devices