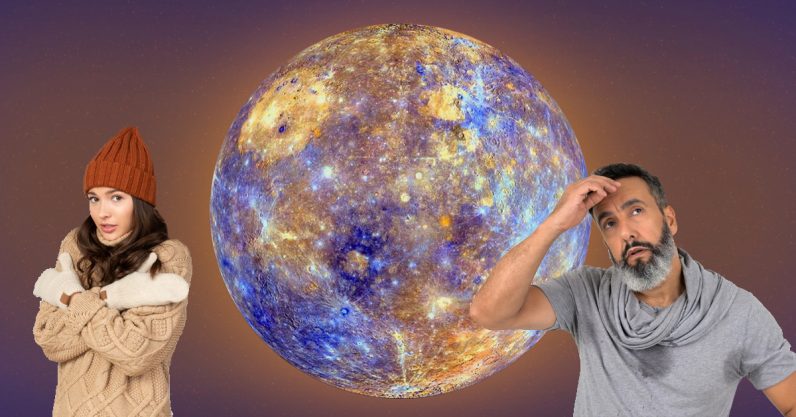 The water you blame the messenger for?

Water ice was first detected on Mercury by astronomers on Earth, who saw telltale signs of the molecule in radar observations of the diminutive world.

In 2011, the MESSENGER (MErcury Surface, Space ENvironment, GEochemistry, and Ranging) spacecraft passed the planet, confirming the presence of water ice within the polar craters on that world.

“I had rather be Mercury, the smallest among seven [planets], revolving round the sun, than the first among five [moons] revolving round Saturn.” — Johann Wolfgang von Goethe

Like the Moon, Mercury is pockmarked by a vast number of craters. This world is also just slightly smaller than the Moon, leading to speculations about how chemical and geological processes compare on the two bodies.

The Moon, like Mercury, is believe to house water ice within eternally-shadowed craters at its pole. However, the water on the Moon has characteristics that differentiate these deposits from ice on Mercury. Why water is different in the two locales remains a mystery, but it could be due to the way ice forms within the polar craters. The Moon is far too cold to drive the hydroxyl reactions described on Mercury, although a similar process could result in hydroxyl molecules bouncing around the surface of our lone natural satellite.

The magnetic field of Mercury is only about 10% as strong as our own protective layer surrounding Earth. Still, it is powerful enough to drive protons and other charged particles into a spiral, driving the molecules down to the surface of the smallest planet in the Solar System.

“These are like big magnetic tornadoes, and they cause huge proton migrations across most of the surface of Mercury over time,” explains Thomas Orlando, a professor in Georgia Tech’s School of Chemistry and Biochemistry.

These protons implant just 10 nanometers (four ten-millionth of an inch) beneath the surface of Mercury. After striking hydroxyls, these molecules diffuse to the surface of the world, where heat can turn them to vapor, allowing the molecules to be transported to polar craters.

One question that remains is how asteroids that struck Mercury developed their water in the first place. Researchers believe the process described in this new study may be able to account for water on asteroids which later (occasionally) strike mercury and the Moon. Even without water, asteroid collisions could form water, investigators suggest.

As humans begin to populate the Solar System, colonists will need water for drinking as well as for fuel. Although we are unlikely to see a human mission to Mercury in the near future, this study reveals that we just may find water in the most unexpected places.