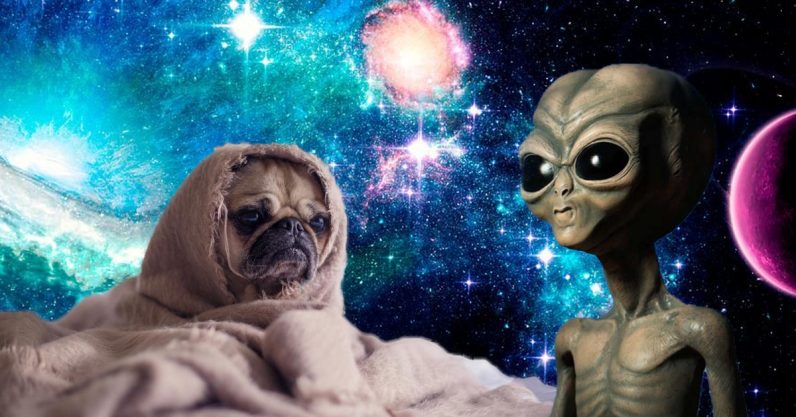 2020 still has a few more weeks left and if ever there was a guarantee it’s not going down without a fight, it’s this week’s glut of sad science stories. Do you like aliens, dogs, or believe scientists will one day find evidence of something greater than ourselves? Well, buckle up because the news is all bad.

Let’s start with the grand scheme and work our way in. Can’t get much bigger than “God,” and that’s exactly what Astrophysicist Michale Hippke set out to find in their preprint research paper titled “Searching for a message in the angular power spectrum of the cosmic microwave background.”

As you might have guessed from the title, Hippke’s work focuses on discerning if there’s any readable message hidden in the microwave radiation that makes up the background of our cosmos.

The Creator of the universe could place a message on the most cosmic of all billboards, the Cosmic

Microwave Background (CMB) sky. It was proposed by Hsu & Zee (2006) to search for such a message in the CMB angular power spectrum.

I process the temperature measurements taken by the Planck and WMAP satellites and extract the binary bit-stream. I estimate the information content of a potential message in the stream as about 1,000 bits. The universality of the message may be limited by the observer-dependent location in space and the finite observation time of order 100 bn years after the big bang.

The paper’s fascinating and worth a read but, because it’s 2020, I’m just going to spoil the ending for you right now. According to the paper, if there’s a creator and it left us a message, Hippke didn’t find it:

I find no meaningful message in the actual bit-stream.

Moving on, it gets worse. Some of our most popular science pieces here at TNW are about aliens, so I know this one’s going to break some hearts. You know all those planets around Proxima Centauri that astrophysicists and other scientists have been excitedly saying lie within a so-called “Habitable Zone?”

Yeah…, not so much. Turns out the habitable zone is anything but. A team of astronomers led by Andrew Zic of the University of Sydney recently determined that planets within that area would likely face conditions far too harsh to support any kind of life as we know it.

The problem, per a paper recently published in The Astrophyics Journal, is that solar flares from the star would create some seriously problematic space weather.

According to a report from Phys.Org, Zic claims:

What our research shows is that this makes the planets very vulnerable to dangerous ionising radiation that could effectively sterilise the planets.

While, of course, there could still be some unknown form of radiation-loving life out there we can probably put to rest any thoughts that this particular habitable zone is inhabited by anything like us.

And finally, it breaks my heart to tell you this but your dog has no freakin’ clue what the hell you’re talking about. A study from researchers at Eötvös Loránd University in Budapest claims that dogs really don’t have the capacity to understand as many words as we think they can.

As the University put it in a press release on EurekAlert:

Dogs can distinguish human speech sounds (e.g. “d”, “o” and “g”) and there are similarities in the neuronal processing of words between dogs and humans. However, most of the dogs can learn a few words only throughout their lives even if they live in a human family and are surrounded by human speech.

2 days ago
Individuals might belief computer systems greater than people