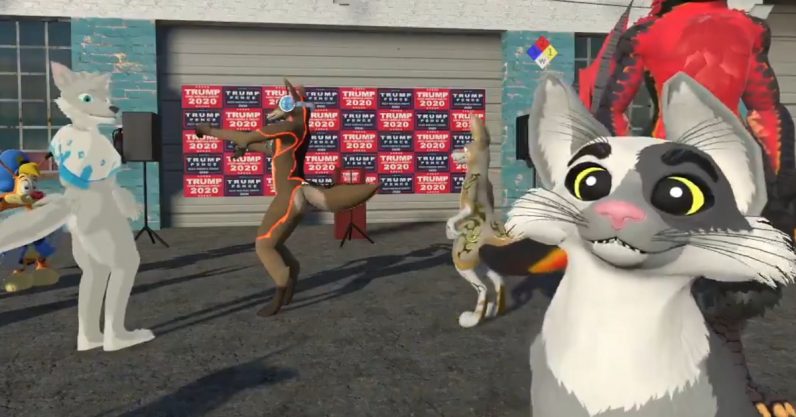 The 2020 United States Presidential election has been a trip, hasn’t it? From the prolonged endeavor of waiting for the final states to President Donald Trump‘s hastily-censored tweetstorms, it’s been an unusual week. But in the aftermath, something so wonderfully weird and funny has happened that I hope goes down in the history books: someone turned an already unusual press conference into a furry hangout through the medium of VR.

Ha ha ha OMG! The grand debut of Four Seasons Total Landscaping was AMAZING! Thank you to everyone who showed up! pic.twitter.com/2c5KQKQwgC

In case you aren’t aware, Four Seasons Total Landscaping was the somewhat baffling choice of a location for a speech by President Trump’s supporters. Situated between a crematorium and an adult bookstore, it wasn’t quite the ritzy hotel for which its name might have led it to be mistaken. But the people who attended, including Rudy Giuliani, appeared to be making the best of it. It was here where Giuliani was informed that the race had been called in Biden’s favor.

An odd interlude from a peculiar election in an unusual year, right? Well buckle up, it’s about to get stranger.

Some clever person has painstakingly recreated the infamous shop in the multiplayer virtual reality platform VRChat. And within a short time, a bunch of furry avatars were running around this, a pivotal site in the election. A clip of the gathering was captured by VR YouTuber CooperTom, who created the map.

Did a small update to Four Seasons. I couldn’t stand looking at that name. pic.twitter.com/HbzwTVuuik

The scene of players in animal guise running amok around the dingy structure feels like it’s symbolic of something. I leave it for a more poetic person than I to compare the scene to the deterioration of democracy or something clever like that. I just hope that, forevermore when I think of this election, this is the first thing that comes t0 mind, because it is hilarious.

If you want to check out the virtual Four Seasons yourself, you can check it out in VRChat here.

13 mins ago
Integrating Know-how And Innovation

1 day ago
The Devices

13 mins ago
Integrating Know-how And Innovation